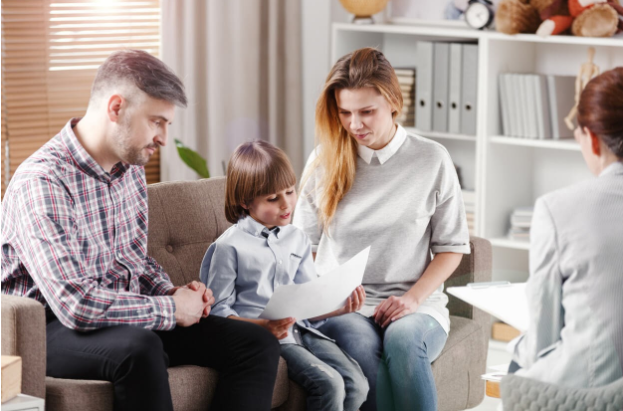 If you are in the midst of a child custody case, it is likely that a judge will (or already has) ordered both parents to attend child custody mediation before taking your dispute to court. Those that are not completely familiar with the mediation process may not be sure how the process works.

Child custody mediation allows parents to resolve disagreements about custody and visitation rights with the help of a third-party, non-partial mediator. If an agreement can be made, the mediator will help the parents draft a parenting plan. In the case that an agreement cannot be reached, a judge will consider recommendations made by the mediator.

Child custody mediation is designed to help parents work together to create a parenting plan that they both agree on and is in the child’s best interest. It is recommended that you consult with your attorney before engaging in the mediation process. We can connect you today with a local child custody attorney.

What is Child Custody Mediation?

Mediation helps parents to resolve disputes with the aid of a neutral mediator. Child custody mediators facilitate the mediation process. They assist parents to negotiate custodial rights, visitation, child support, and other areas of concern.

There are three goals of child custody mediation, they include:

What Are The Benefits of Child Custody Mediation?

Most family court judges require parents that have child custody disputes to attend mediation because it can be beneficial for the child, the parents, and the courts. Listed below are benefits that child custody mediation can provide:

Steps in the Mediation Process

The initial meeting typically consists of setting the ground rules for interactions between the parents and setting expectations. In some cases, parents prefer to be in separate rooms while the mediator travels back and forth between the two. In others, parents are able to negotiate in the same room.

Subsequent meetings focus on identifying all contested issues and major concerns. The most important discussions typically involve concerns about:

Child custody mediation sessions can take 2 - 3 hours. The time spent, lessons learned, and agreements made during mediation can serve as a building block for a stronger relationship between the parents as they move forward.

During the mediation process, the mediator will help you and your co-parent to find solutions to issues that you currently disagree on. It’s best to remember to keep the child’s best interest in mind during negotiations. As you work with the other parent to create a parenting plan, other issues may arise that the mediator can help you to resolve.

The negotiation and solution-finding process of child custody mediation allows parents to create solutions that work for their family and are in the best interest of their child, instead of relying solely on a judge’s opinion.

Once signed, the parenting plan is a legal document. If either parent does not fulfill the duties outlined in the parenting plan, they may be subject to legal consequences as well as decreased custodial rights.

Disregarding a court order to attend child custody can result in being held in contempt of court as well as have a major impact on the final child custody decisions about custody, visitation, and child support obligations.

What Happens if We Can’t Agree on Anything During Mediation?

In the event that parents can’t come to an agreement during the mediation process, the case will likely proceed to court. It is important to note that the flexibility and control that you have during child custody mediation will be lost when your child custody case goes to court. When in court, parents must adhere to the ruling made by the judge.

Unfortunately, it is not always feasible for parents to agree during mediation. Parents that have irreconcilable disputes must prepare for a potentially long and expensive child custody case. A child custody lawyer can be beneficial to people that are able to come to an agreement with their ex during mediation, but they are especially necessary during a highly contested child custody battle.

Do Lawyers go With You to Mediation?

Lawyers are permissible in mediation, but it is your choice to bring your child custody lawyer with you or not. In general, there are three potential scenarios for child custody mediation sessions, they include:

In the case that both parents choose to attend mediation sessions without their attorney (which is common), it is normal for each party to consult with a child custody lawyer before mediation sessions begin. If only one parent brings legal representation, the mediator will design the mediation process to counter any potential imbalance of power.

Regardless of your choice to involve a lawyer during mediation sessions or not, it is typically in your best interest to consult with a child custody lawyer to learn more about the process, your rights, as well as your responsibilities. At a minimum, it is recommended that you meet with an attorney before mediation and once a final parenting agreement is agreed to, but before it is signed.

How Expensive Will it be to Hire a Child Custody Lawyer?

Child custody attorneys can assist with creating a negotiation strategy, understanding your rights and obligations, and reviewing potential agreements to ensure that they are in your child’s best interest.

High upfront legal costs prevent many parents from seeking the legal representation that they need. Fortunately, there are methods to save money on legal fees. One of the most important cost-saving strategies is to develop and maintain a good relationship with your co-parent. This will facilitate less time in mediation, less required from your lawyer, and easier approval from a judge.

Save Money With an Unbundled Lawyer

Many parents can’t fathom the thought of paying a child custody lawyer thousands of dollars in upfront fees, which is why they turn to an unbundled attorney instead. Unbundled legal services offered by Access Legal help to save money by eliminating high upfront fees and decreasing the number of hours billed by your attorney.

Parents that hire an unbundled attorney are prepared to take care of some tasks on their own (i.e. serving documentation, filing paperwork, or drafting a parental plan) while allowing their attorney to handle the more complex matters such as reviewing parental plans, advising on family law, negotiating with your ex’s lawyer, etc.

If your child custody dispute is more complex, our network of small law firms and independent unbundled attorneys also offer affordable rates for full-representation. Contact us to get connected with an unbundled lawyer today.

What do Child Custody Evaluators Look For?

Can a Husband Make a Will without His Wife?

Who Gets the House in a Divorce?